GSM This Is Love Banquet

As promised, here are some photos from the Global Support Mission This is Love banquet we had on February 5th at Rocketown in Nashville.
You can view them here.

Be sure to check them out!

This week seems to have flown by! I can hardly believe it's already Thursday. I think it's due to the crazy weather that seems to have everyone in a hurry for the week to be over. Sunday was so nice, very warm even. As the week progressed, the colder it got. Yesterday (Wednesday) I woke to the ground being covered in white! Finally, snow! (We get REALLY excited when it snows in TN) It continued to snow off and on all day. I enjoyed listening to the hustle and bustle of the radio announcers; giving the city a play by play of the traffic. You would think that a snowstorm had just dropped 2 feet of snow! :) All of the schools in the area were closed, actually 3/4 of the state was closing the schools. My friend Trish phoned to tell me that she had a 2 hour delay at work; then they closed the office at 2pm! How great is that? Trish loved it too. I enjoyed the day watching James discover the snow outside. He would stand at the window and ooh and aah as they hit the window. At one point he was holding on to the windowsill, and tried to hike his leg up, as if he was going to climb onto the windowsill for a better view! So funny.

The flu seems to keep going around, it's even struck the home I nanny out of. I'm praying it doesn't hit me! I don't want it! :) I've been making sure my body gets enough water and sleep so my immune system doesn't drop. Tuesday night Trish, Katie and I went to Jackson's (great little grille on 21st Ave.) for dinner. It was nice to do something mid-week; I normally don't allow myself that luxury. But, that night was different. Katie and Trish wanted me to come along to "spy" on a yound adults group that was meeting, to get a feel for the group. Our plan backfired greatly. We were ushered to a table at the opposite end of the place! We got a good laugh out of it. The night couldn't be complete without a trip to Fido, a great local coffeehouse just down the block from Jackson's. As usual, the three of us ended up laughing so hard our cheeks hurt. I'm sure many people thought we were on something.

I'm looking forward to this weekend, I'm headed to Atlanta for my cousins' wife's' baby shower. Somehow this weekend ended up working for almost the entire family to get together.
I am excited to:
1) See my cousins Nick (wife is having the shower) and Andrew(my age, practically my brother).
2) See Lara, Nicks' wife.
3) Catch up with my Mama on the trip there and back
4)Hang with my aunts whom I never get to see
5) Go out Saturday night with my cousins :)
6) GO TO IKEA!!

Ok, well, IKEA in my heart is more towards the top of my list, but hey. I'm trying to be nice. :) My sister was supposed to join us, but isn't able to now. Bummer! I was looking forward to some seeester time. Ah well. The boy cousins will suffice I guess...

I'm at home sick tonight, which is a bummer; since it's Friday night! I'm actually enjoying a night off-I have a fire in the fireplace (mmmm...), brownies in the oven and I'm watching No Reservations. So far, so cute! I'm loving it. I'm hoping that my aches and pains won't turn into the dreaded flu that's been going around. If you've experienced the flu lately, I'm so sorry! I'm hoping to be feeling better by the morning.

Trish hooked me up with an AWESOME deal on pillows (I know, right?) today! She found a buy one get one free deal at Linen's and Things, and then had another 20% off that. So, want to know how much I saved? $63!! I only paid $17 for EIGHT pillows. Quite the deal, eh? I do say so myself. My bed looks so nice and plush with four pillows on it!

I hope your Valentine's Day was fabulous! I had a hot date with a blond haired, blue eyed sweetie! I'm talking of James, of course. (James is the one year old I nanny for) He had a Valentine's gift for me when I arrived, so sweet! "He" (aka, Danielle his mom) got me great comfy pj's, a framed photo of himself in a frame that matches my room, a heart shaped red suede pillow and a sweet card. He sure knows the way to a girls heart! :) After he went to bed, my friend Katie came over and we ordered Chinese and watches LOST--my addiction that I am not afraid to admit! That show is amazing.....

I hope you have a great weekend! 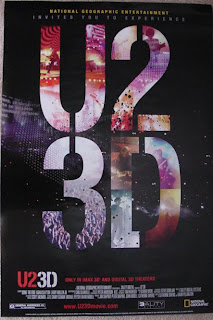 I've just returned from seeing the last showing of U2, in 3D at the IMAX. It was INCREDIBLE. I know it's a late work night, but I figure it's the closest I'll ever get to U2! A group of friends and I decided to go at the last minute yesterday; and I'm SO glad we went! One of the things I've always wanted to do was to see U2 live. This was as close as I could get-for now. Bono did some particularly peculiar interpretive dancing (which included: The Eagle, The Airplane, and my favorite, walking like a zombie blindfolded to his satellite stage. Hmm.) which was amusing throughout the show. The Edge (Electric, acoustic, keys) delivered quite the show, as always-and I was thoroughly impressed with the drummer and bass player as well.

We arrived a few minutes late and missed the opening song 'Vertigo', but we were soon kicked back in the back row lookin' cool with our 3D glasses on. I was sad that the theater audience wasn't more participative, but it's ok. Trish and I had our own back row party, while Ian had his own personal dance party. Alone. But we still love him.

All in all, it was a fantastic night! I'm looking forward to writing when I've seen them live....

I know, it's been a while since I've posted last. Things are staying busy here in Nashville! Since I've last posted I have had a new rooomate move in, and Sara is moving out this weekend. It's bittersweet; I'm sad to see her go, but she's getting married, so that's exciting! We also had the This Is Love banquet for Global Support Mission (I'll post pictures soon!) last night-which was so fun and exciting.

Global Support Mission (GSM) was founded by two young men who attend my church, Travis and David. I've been volunteering for their organization and LOVING it! We worked hard to put this banquet together, and it was so satisfying to see it go off without a hitch. Well, Nashville was under a tornado watch last night and we had to relocated to a safer room in the venue (which was Rocketown!). Other than that, the banquet was a success. There was a 20 piece Big Band, 'The Moonlighters'. We enjoyed dancing the night away, that's for sure! Faith Kunhira is the founder and operator of Bringing Hope to the Family, the orphanage and vocational school in Kihura, Uganda. Faith was the keynote speaker of the evening; and she shared her heart and vision for the village. Bringing Hope is the main orphanage that GSM is connected with-as of now. It was great to have her speak, I loved her accent! She was dressed in full African garb, complete with pink paisley. So cute. As I said before, I'll post photos of the event as soon as I can.

I'm still very much enjoying nannying for James, he's just the sweetest little boy ever! I'm enjoying him learn and discover new abilities and functions of his little body. His most recent accomplishment: spinning in circles! (I know, so cute!). He's also begun dancing a little-his favorite song you ask? Whitney Houstons' 'I Want to Dance with Somebody'. We break it DOWN in the kitchen. He also likes Los Lonely Boys 'Heaven'. He's been sick this past week unfortunatley, but I think he's feeling better now. Bless his heart! His first fever...it was rough.

Woodbine is going great, we have experienced growth and it's just really exciting right now! We've started hanging out with the other young adults and realized that we have more people under 30 than we thought! A few weeks ago we enjoyed hanging out at Jon's playing Guitar Hero. The guys thought it would be a great idea to create a complete bracketed tournament, and the games begun. I'm proud to say that I am the ranking #2 Guitar Hero player! I battled my way through easy and hard songs, defeated Brady, and lost to Travis, who had played only once before. I demanded a rematch, but didn't get it. :)

That's it for now! As always, I'm on the move! I'm excited about this weekend-I'm moving into Sara's old room. It's always exciting to get to re-do a room!

I hope your February has gone as well as mine has.....Happy Valentine's Day!