A Few of my Favorite Things..

A few things that make me smile during the Holidays....

Getting a Christmas card in the mail (it's like being able to open a present early!)
The smell of a fresh Christmas Tree
Starbucks Holiday cups
Cinnamon
Fires in the fireplace
Shopping for others
Endless Christmas music
Endless Christmas movies
Finding the perfect gift, and the anticipation knowing that you have it until the moment they open it!
Seeing Christmas lights and trees while driving down the road
Hearing someone say Merry Christmas, because they say it way more than someone saying hello on a regular day.
Discovering out how other cultures celebrate Christmas
Wearing scarves, hats and gloves
Baking
Building a gingerbread house, and then eating it piece by piece :)
Seeing the presents pile up under the Christmas tree
The smell of "holiday" in the air. Everything is just magical :)
Road Trip CD mixes for the ride home to see family
Listening the the roar of laughter crammed in one room at my Grandmas

I know there more things, but I hope that reading this list brings a smile and memory to your mind.

Even though I have stopped being a member of CrossFit, I still very much adhere to their prescribed workouts; with less intensity. Fran is one of the most popular Workouts of the Day (WOD's). The prescribed WOD for Fran is:
Reps-21-15-9 (FOR TIME)
95lb Thrusters
PullUps

It's a very intense work out, and has been completed in 2min 2seconds by Josh in California. CRAZY!! Anyway, here's a new and interesting spin on Fran from a CrossFit affiliate...

Yes, please! I'm always on the hunt for a bargain, (as are all of my friends, thank goodness) and it's like a triple score when I come across something for free. As a life-long fan of Dr. Pepper, and more recently, it's Diet counterpart, I was ecstatic to hear of this release:

"Dr Pepper is making good on its promise of free soda now that the release of Guns N' Roses' "Chinese Democracy" is a reality. The soft-drink maker said in March that it would give a free soda to everyone in America if the album dropped in 2008. "Chinese Democracy," infamously delayed since recording began in 1994, goes on sale Sunday. Beginning Sunday at 12:01 a.m., coupons for a free 20-ounce soda will be available for 24 hours on Dr Pepper's Web site. They'll be honored until Feb. 28."

I wish I could say I found this amazing site first, but alas, I did not. A friend on Facebook posted this, and I had to share. If you appreciate art, then you will love this!

Not so many words...

I haven't had many words lately. Not sure why; if you sit me down face to face, I could talk all night! I've been needing to update this blog, and email dear friends out of town for weeks; and I just can't seem to sit and type out the words lately. Strange.
Well, I can't believe this weekend is already coming to a close! Friday night I babysat for the family I nanny for; which is always a pleasure. James (the toddler) is such a sweetie and an all around good little boy. Saturday I had an allergy medicine induced sleep-in! I wasn't feeling well before I went to bed, so I took my allergy meds...and slept until 11am! Woops! Not gonna lie, it felt pretty good. I met up with Julie for a quick hike around the Natchez Trace, SO beautiful this time of year! Great conversation, as always :). Ran home to meet Mark, who was putting together my shiny new TV cabinet (he did a fab job, and it looks great!); and get ready for the DRIVE IN!!! WOO HOO! This was my third time this year getting to go to the drive in movie with friends, and I'm hoping to be able to go at least one more time (although I may be staying IN the car this time...). A ton of people showed up, we loaded the cars with blankets, food, coffee and hot cocoa and were off. We piled on the ground and saw Madagascar 2 (hilarious, by the way) and Eagle Eye. Had a wonderful time with old friends, getting to know others, and meeting new people all at the same time! 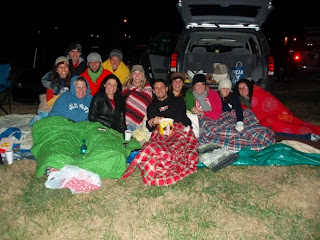 The past few weeks have been eventful, the family I nanny for had their much anticipated little girl! Emerson Elizabeth Mulvey was brought into this world at 12:46am on October 23. She weigh 8.5oz and was 19.5in long. Such a sweet little girl! I've enjoyed watching her grow and changed in the few weeks she has been with us. For Halloween (which is also James' birthday), James was Peter Pan, and Emerson was TinkerBell! HOW CUTE!! They stole the show, that's for sure.
Let's see....I took a trip to KY to send off my younger brother to the Marines, and celebrate his birthday, Thanksgiving, Christmas and New Years since he will be in Basic Training. We celebrated how we always do: a shooting contest. I love my family, can I just say that? All the boys got out their guns and ammo, and we headed out to the field to shoot. Went bowling, to the movies, etc. Had a great time all around .

Over the past month since I've last posted, I've enjoyed a few trips to Arrington Vineyard; seriously one of my new favorite places! We've gone to the Drive In Movies, regular movies, birthday parties, night on the Fort at Trish's....the list goes on. I do need to give full attention to probably one of the BEST things that happened to me this fall. Over the past two NFL seasons, I have become an avid Titans fan. Must be something about them being in the city that I love and live in! Of all the games this season, I wanted so badly to go to the Monday Night Colts/Titans game. I went two seasons ago when we stomped the Colts, and wanted to see it happen again. But, it wasn't looking likely at all. So, I settled for attending a party at Jon and Bethany's (which was looking to be supa fun!). Then, Saturday night, the miracle happened. Some friends of mine have season tickets and a box suite...AND THEY CALLED ME! They invited me to go to the game, which I very quickly said yes! I was so excited. Seriously, of ALL the games this season, THIS was THE ONE I wanted to attend. So, Monday night came, and we all layered and bundled up (it was freezing) and headed to the stadium. Not before of course having a pre-tailgate tailgate at the Williams! Kelly had quite the spread, and Jeff whipped up some fabulous pomegranate martinis. Soon enough we were off to the game, and the tailgate party. Unfortunately, we were stuck in traffic so long that we missed the tailgate. Lucky us we had the pre party already! When we walked in the stadium, it hit me just how good our seats were. 40 yd line, home side...close to the field, I was in football heaven! The game was great, close, and exciting. In the 3 quarter, Todd leans over to us and says: "Let's go up". I didn't know what he was talking about, until we were headed up to the Box. Yup, the box. We all agreed that free food, drinks and HEAT were great, but the outdoor seats were way more fun. There's just something about the yelling, screaming, cursing, beer smelling guys in the stands that make a football game great. So, I'm ever so thankful for the William's inviting me to go along, making my NFL dream come true; for this season :) .

Well, I've used way over my quota of typed words for the day, I hope you all have and will enjoy the fall weather while it lasts! Be sure to stop by Starbucks and try their Signature Salted Caramel Hot Chocolate-it's fabulous! 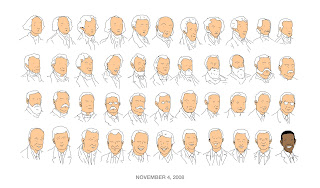 History was made last night. Democratic or Republican, Black or White, NoBama or McPalin....it's all over. Barack Obama is now our 44th President-Elect of the United States. I personally did not note for Obama; and do not agree with his opinions and standings. However, he is now in line to be our next President and I will support my country's leader. In my opinion, God knew this was going to happen, and I place my trust far more in Him than a leader. We elected a President, not a Saviour, as my pastor so frequently states.
In another perspective, it was so cool to see other ethnicities grab hold of this election; where in the past they may have felt they didn't have a voice, or it would not be heard. Seeing seas of African American people shouting for their country, USA; brought tears to my eyes and shivers down my spine. How cool to see our country truly uniting to elect a President (again, standings and opinions aside). I know for my short adult life, I haven't seen that happen to this extent.

It's time to unite, support and love one another. We all love this country so much; it's time to show it.